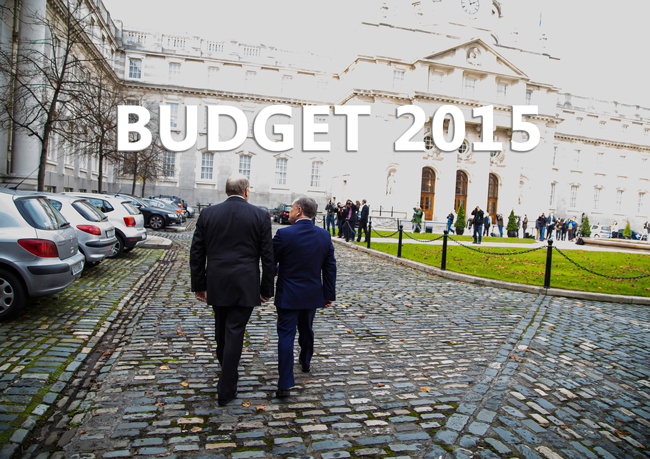 Pensioners, the disabled and families with children to benefit from Budget 2015.

TAX cuts on income and a new Water Charges Relief. Rise in Health spending with the cost of various fees and schemes frozen.  Christmas Bonus are back. Increase in Gardaí numbers plus new Garda vehicles. Cigarettes hit with a forty cent increase on a packet of 20. Alcohol, petrol and diesel not changed.

Pensioners and People with Disabilities
Pensioners and people with disabilities who are living alone will have their Living Alone Allowance increased to €9.00 per week from January. The Tánaiste said, “providing this increase in recognition of the fact that people living alone can be more vulnerable to economic deprivation than two-person households where resources can be pooled”.

Water Services Support
Each quarter commencing January 2015, €25 will be paid to pensioners, people with disabilities and carers who are receiving a Household Benefits Package.

An increase of €100 per year will be provided to all Fuel Allowance recipients who do not already receive the Household Benefits Package.

Christmas Bonus:
A Christmas Bonus of 25% of the rate of the weekly payment will be paid to all long-term welfare recipients in early December 2014. The Tánaiste said, “The Christmas Bonus was abolished by the previous Government in 2009.  I am pleased to say that I am in a position to partially restore the Bonus this year – it is in recognition of the position of vulnerable households”.

Minister for Health Leo Varadkar and Minister of State Kathleen Lynch have secured an increase in funding for the health service in 2015, the first Budget increase for seven years.

Minister Varadkar said: “The cycle of cuts in health has come to an end. The 2015 budget is challenging, but its targets are achievable.

2015 will see the extension of BreastCheck to women up to the age of 69, expansion of Mental Health Teams and further investment in suicide prevention. Introduction of the GP care without fees for the over 70s and for the under-sixes when negotiations conclude with the IMO. This will mean that almost half of the population will have access to GP services without fees.

Frances Fitzgerald TD, Minister for Justice and Equality, announced two further intakes of recruits to the Garda College in Templemore, the first 100 to take place before the end of this year with a further intake of 100 in January 2015. 100 new recruits already entered Garda College in September 2014. Additionally, €10 million is secured for over 400 new Garda vehicles.  The vehicles will begin to come on stream in early 2015.

The Minister said, “There will be particular focus on an increased provision of marked Garda vehicles, to provide an enhanced visible policing presence in communities around the state and to support Gardaí in their efforts to reduce crime.” The Minister added that “both urban and rural communities will benefit in terms of the provision of modern new vehicles for Garda patrol and response.”

Minister Fitzgerald announced a further capital allocation of €42 million in 2015 for the provision of three new Garda Divisional Headquarters in Galway; Kevin Street in Dublin City and Wexford. It is expected that these buildings will be constructed over the next three years.

An additional €4 million is being made available in both the current year and 2015 for the updating of Garda technology.

The allocation for the Better Energy Programme will total some €47 million in 2015, which will assist in the realisation of energy saving of over 460GWh next year. “One in six homes in Ireland have now been retrofitted through the Better Energy programme. The schemes also provide support to low-income households with over 10,000 low-income homes to benefit from energy efficiency upgrades next year.” Minister White said. In overall terms, activity under this programme will lead to a reduction of 115 kT CO2 and will support an estimated 2,900 jobs in the economy.

Older People and People with Disabilities – €9.25 billion in supports
· Living Alone Allowance to increase €9.00 per week from January – 177,500 people to benefit.
· Pensioners aged 80 and over will continue to receive an extra €10 per week
· Free Travel Scheme is fully maintained.
· Electricity/Gas Allowance and Free TV Licence are unchanged.

Families with Children – €2.4 billion to support families with children
· Extra €5 on Child Benefit for each child per month from January to benefit 613,000 families, with a total of €1.97 billion to be paid in Child Benefit in 2015.
· Additional €2 million for the Department’s School Meals Programme.
· Over €349 million will be provided for Family Income Support (FIS).
· Back to School Clothing and Footwear Allowance and all other supports maintained.